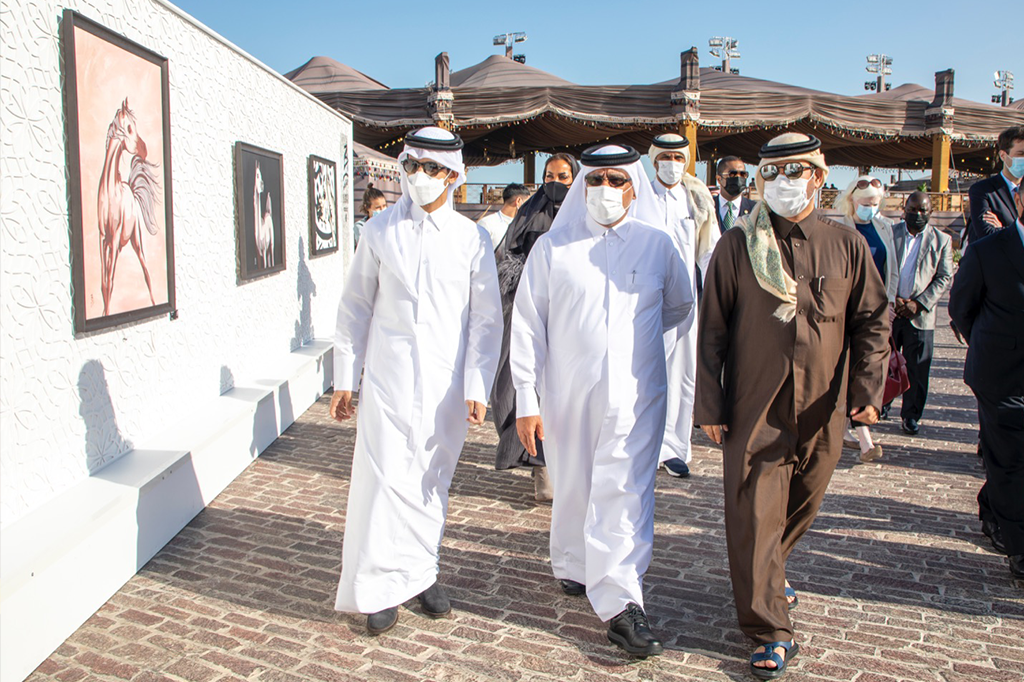 Amidst a distinctive heritage atmosphere that boasts of originality and equestrianism, the second edition of the distinguished Katara International Arabian Horse Festival (KIAHF 2022), being held under the generous patronage of HH The Amir Sheikh Tamim bin Hamad Al Thani, kicked off to a grand start at the Katara Esplanade on Wednesday.

The 11-day festival (February 2-12) was inaugurated by HE Dr. Khalid bin Ibrahim Al Sulaiti, General Manager, Katara, and Chairman of the Organizing Committee of KIAHF. The opening was marked by the presence of a number of Their Excellencies ambassadors and representatives of diplomatic missions to the country, and other dignitaries.

On the occasion, Dr. Khalid bin Ibrahim Al-Sulaiti expressed his happiness with the launch of the second edition of the Katara International Arabian Horse Festival, which will continue until February 12 at the Katara waterfront.

“The Katara International Arabian Horse Festival has become an important international event that attracts equestrian enthusiasts and lovers of Arabian horses of all nationalities and categories as it has gained its global reputation since the launch of its successful first edition. The festival today is a shining example of the march of Qatari equestrian sport and its distinguished championships,” he said.

He pointed out that the festival is increasing its great role by preserving the equestrian culture, reviving its noble heritage, and transforming it in an innovative way for new generations, stressing that the current version will be distinguished and exceptional with its cultural and heritage events and new championships.

He thanked the sponsors of the festival, which he described as Katara partners in the festival’s success, development and prosperity.

A military band, exactly at the stroke of 3 in the afternoon, marched into the scenic arena for the ceremonial start.

The day’s events began with the Yearling Fillies category of the Arabian Peninsula Horse Show which will be held from February 2 to 5 and is showcasing 239 horses from the region.

The festival also has a number of distinguished art exhibitions highlighting the status of Arabian horses with state-of-the-art photo exhibitions and horse art exhibitions with the participation of a number of artists. Live saddle painting in addition to shepherds’ tents and cafes are providing for great delight for visitors.

KIAHF 2022 has a whopping total-prize-money of QAR 17,083,500 of which QAR 13,990,000 is for the Title Show Championships. This is besides the other in-kind prizes including cars and watches from Nasser Bin Khaled and Ali Bin Ali Luxury, respectively.

The Arabian Peninsula Horse Show has a total prize of QAR 3,093,500 and also has plenty of other in-kind prizes for various categories.

At this year’s KIAHF, horse owners and breeders will also be able to buy the egg of top breed international mares.