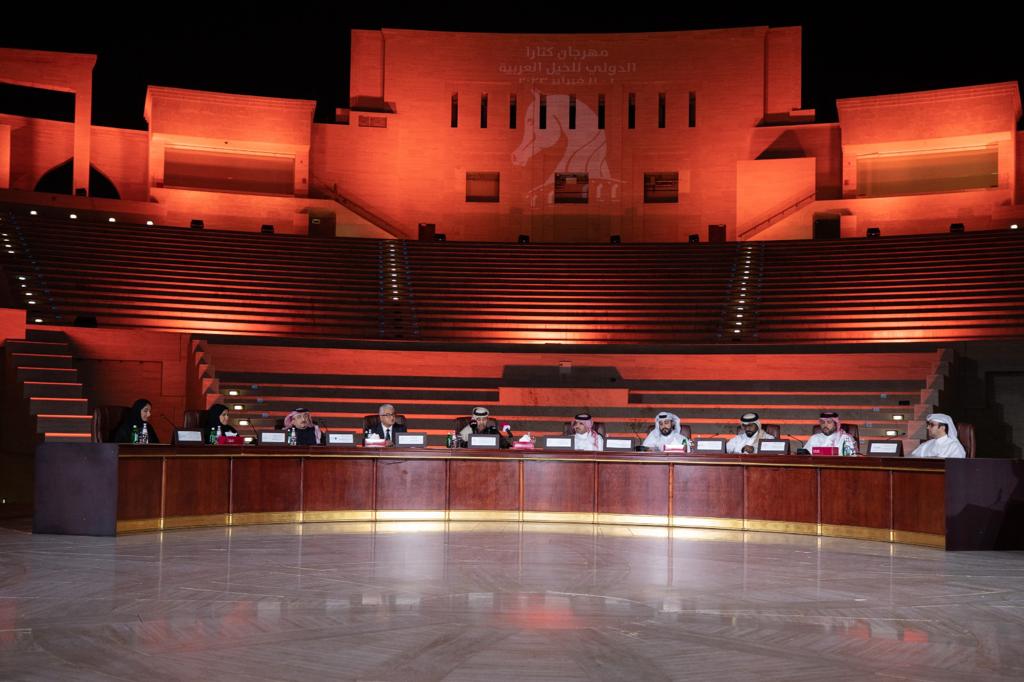 Prestigious festival to be held at Katara Beach from Feb 1-11, 2023

Under the generous patronage of His Highness The Amir Sheikh Tamim bin Hamad Al Thani, the Katara Cultural Village Foundation launched the third edition of the Katara International Arabian Horse Festival – KIAHF 2023 in cooperation with Qatar Equestrian Federation (QEF) and Qatar Racing and Equestrian Club (QREC) at the Katara Beach from February 1-11, 2023.

The launch was announced at a press conference held at the Katara Amphitheater on Monday evening in the presence of HE Prof. Khalid bin Ibrahim Al-Sulaiti, Chairman of the KIAHF Organizing Committee, and General Manager, Katara Cultural Village Foundation; and Bader Al Darwish, KIAHF Title Show Manager, and President, Qatar Equestrian Federation.

HE Professor Khalid bin Ibrahim Al-Sulaiti said: “Katara was keen to launch the third edition of the festival with all its elements of leadership, excellence and success, all in order to embody the bright history, revive the ancient culture and enrich the authentic heritage of the Qatari equestrian sport. We have harnessed all capabilities to organize the festival at the highest level.”

He also stressed that “the third edition of the Katara International Arabian Horse Festival will witness a remarkable development at all levels and pointed out that the festival enjoys a large and growing international interest reflected in the volume of international participation with the best and finest ancient horse breeds that will be transported from different continents of the world.”

HE also announced that Qatar will host the World Championship for Purebred Arabian Horses in December 2023 – a result of an agreement signed by Katara with the National Center for Agricultural Exhibitions and Competitions in France. Katara will host the 2023 and 2025 editions of the championship to be held for the first time outside France in 40 years.

Bader Al Darwish, President, Qatar Equestrian Federation, said, “This version of KIAHF will witness a remarkable development at all levels as the number of horses registered so far has reached 481 horses, and registration is still open for the newborn category.”

The Arabian Peninsula Horse Championship will have a Total Prize of 3,093,500 Qatari riyals in addition to in-kind prizes provided by the sponsors besides the legend prizes and the special prize.

He also explained that work has been done in this edition to bring about changes in the method of arbitration, which will have a positive impact on the course of the competitions and their strength.

Sheikh Faleh bin Nawaf Al Thani, MD of Nasser Bin Khaled Group, said: “We continue the path of brilliance and success with this distinguished festival, which has become an important station on the agenda of events in Qatar. This new edition of the Katara International Arabian Horse Festival continues to highlight the beauty, distinction and originality of Arabian horses and their uniqueness in the world, which contributes to preserving our cultural and civilizational heritage.”

“I appreciate their dedication and hard work in organizing the Katara International Arabian Horse Festival, which has become a global event awaited by those interested in sports and events for purebred Arabian horses,” he said.

“On my own behalf and on behalf of Vodafone Qatar, I would like to express our pleasure to renew our sponsorship of the third edition of the Katara International Arabian Horse Festival, as the official Telecom partner.

Ahmed Al Jarboey, COO, QIC, said: “Given the position of Qatar Insurance Group as a leading Qatari company, we realize that we have to play a fundamental role in supporting the Qatar National Vision 2030. That is why we are pleased to once again be the Platinum Sponsor of the Katara International Arabian Horse Festival.”

KIAHF is considered one of the most prestigious, luxurious and largest of international festivals showcasing purebred Arabian horses. KIAHF 2023 will comprise the Katara Arabian Peninsula Horse Show, the prestigious Katara International Horse Festival Title Show, and The Auction, during the eleven-day extravaganza carrying a total purse of 17,083,500 Qatari Riyals.

As many as 481 horses would be participating – this includes 273 horses from 18 countries including Qatar for the prestigious Title Show, and 208 entries from 10 countries for the KIAHF Arabian Peninsula Horse Show. A large number of entries are also expected for The Auction – witnessed and attended by connoisseurs of equestrian.

The State of Qatar has been known as a global center for Arabian horses and equestrian sports being a pioneer in caring for and protecting the purebred Arabian horses which has strengthened its position in this field. KIAHF represents one of the most important sporting events in the field of equestrian and furthers the rich heritage by promoting the status of purebred and unique Arabian horses at various local, regional and international levels.

Horse owners and breeders, individuals and associations that own equestrian training centers and those concerned with Arabian horse institutions benefit greatly from the opportunity by participating in the largest gathering of purebred Arabian horses at KIAHF which provides them with the platform to develop their business by meeting major stakeholders in the equestrian industry.

Horse owners and breeders participate with confidence in KIAHF where the highest standards of integrity and fairness are applied and the championships are subject to arbitration systems according to specified standards and clear rules globally recognized by the ECAHO (European Conference of Arab Horse Organizations) and with an international jury of judges.

KIAHF is also marked by a variety of accompanying events including live art shows and paintings that highlight purebred Arabian horses including a photo competition, organized for a group of professional and amateur photographers for the best pictures of horses in action at KIAHF 2023.

The picturesque Katara beach will also host several art exhibitions, including painting exhibition on saddles, and free drawing exhibition related to horses. A distinguished and creative group of Qatari and resident artists, from the Arab Gulf countries and other participating countries participate in these exhibitions.