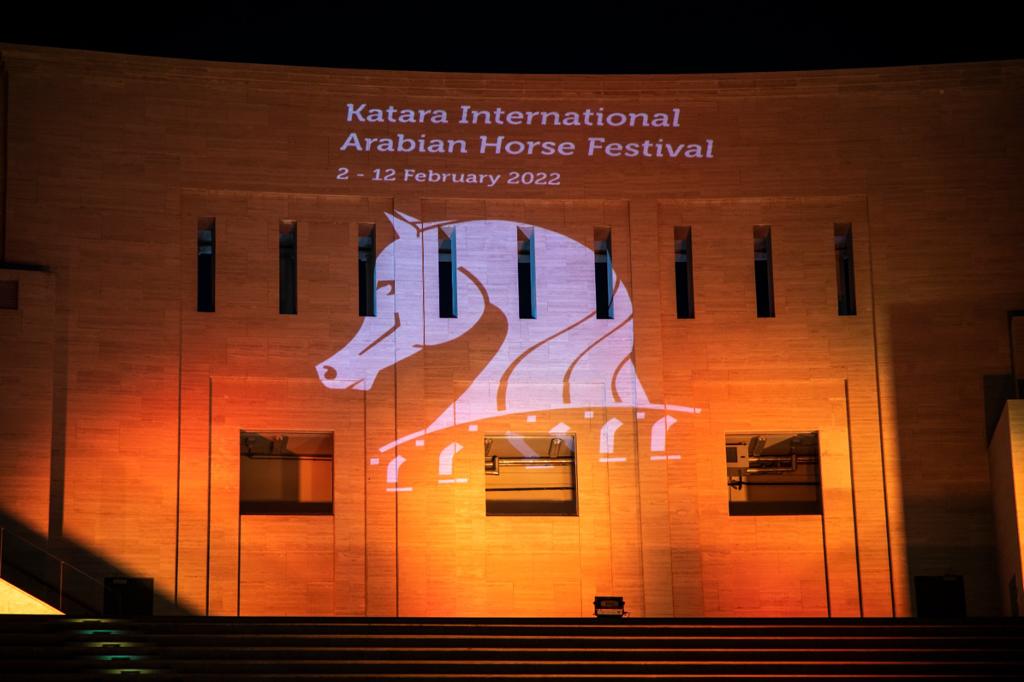 KIAH second edition to be held over 11 days and includes Peninsula Horse Show, The Auction and Title Show Championship

The Cultural Village Foundation, Katara, announced the launch of the second edition of the spectacular Katara International Arabian Horse Festival (KIAHF) 2022 on Sunday evening which will be held from February 2 to 12 under the patronage of HH The Amir Sheikh Tamim bin Hamad Al Thani at Katara Esplanade in conjunction with Qatar Equestrian Federation (QEF), Qatar Racing and Equestrian Club (QREC), and Qatar Foundation.

Announcing the launch of the second edition of KIAHF 2022, His Excellency Dr. Khalid bin Ibrahim Al-Sulaiti, General Manager, Katara, said, “The success of the first edition of the Katara International Festival for Purebred Arabian Horses resulted in the addition of a championship for Arabian Peninsula horses as a new addition in the second edition of the festival, in response to the passion of Arabian horse lovers and breeders. In addition to a set of accompanying and surprising events.

“Katara has harnessed its great potential to host this global event to produce the most distinctive and attractive version for the largest number of audience and followers.

“For the second year in a row, the festival enjoys great turnout and increasing international attention, which is embodied in the large international participation to compete in strong competitions with the best and finest horse breeds that will be transported from different continents of the world.

“KIAHF 2022 edition has a total prize-money of 17,083,500 Qatari riyals. This makes the festival a milestone in the map of the international Arabian horse championships, and enhances Katara’s position as an incubator for major international sporting events and events.

“I can only thank the sponsors of the second edition of the festival: Vodafone Qatar, Nasser Bin Khaled Group, Ali Bin Ali Group, Al Ahli Bank, Qatar Insurance Group, Qatar Airways, Al Kass Sports Channels, White Event and Q-Communication. Thanks are also extended to all the media platforms that accompany the coverage of the festival’s events from inside and outside Qatar.

“In conclusion, we hope that the championships and events of the Katara International Arabian Horse Festival in its second edition will receive all the approval of our honorable audience, and we hope that you will spend the happiest and most enjoyable times with them through your interesting follow-up.”

“It is our pleasure to announce to our dear audience that the Katara Arabian Horse Festival will be the most advanced, distinguished and creative, which will enhance its position among the most prominent sporting events and events in the State of Qatar and the region and dedicate its name as an annual global forum that brings together lovers of equestrian and Arabian horses,” he added.

“The KIAHF 2022 auction will see 32 qualified purebred Arabian horses besides horse breeders can buy the egg from international mare.

“The prestigious “Title Show” championship has a registration of 309 horses from 11 countries as compared to 248 last year.”

About the various bountiful of prizes, Al Darwish informed that the total prize-money at KIAHF 2022 will be 17,083,500 Qatari riyals in addition to in-kind prizes awarded to the first place winners. Out of this, the Title Show will carry a total prize of 13,900,000 Qatari riyals besides in-kind prizes, which are cars provided by. Nasser Bin Khaled, and watches provided by Ali Bin Ali Luxury.

The Arabian Peninsula Horse Show will have a total prize-money of 3,093,500 Qatari riyals, in addition to in-kind prizes consisting of cars presented to the first winning places.

There will also be special prizes namely: The Legend (Senior category) QAR 3,000,000; and Special Award for the horse which has won all categories since being a Yearling of QAR 2,000,000.

“The great global presence achieved by the Katara Arabian Horse Festival, this great global presence, is a reflection of what the authentic equestrian sport finds of the wise Qatari leadership, an interest that made the State of Qatar a beacon for this sport, which is a symbol of courage, nobility, pride and pride.

“In conclusion, I would like to extend my sincere thanks and appreciation to the sponsoring companies, institutions and bodies of the Katara International Arabian Horse Festival, the organizing committee for their efforts and ability, and all those who contribute to the launch and success of this global sporting event,” he concluded.

His Excellency Sheikh Nasser bin Nawaf Al Thani, Executive Vice President of Nasser bin Khaled Al Thani & Sons Holding Group, the Diamond Sponsor of the festival, said: “The Katara International Arabian Horse Festival has become one of the most awaited events in Qatar, as it brings together an elite group of participants from different countries of the world. Especially as it highlights the beauty and originality of the Arabian horse and distinguishes it from other breeds. Therefore, we are pleased, in Nasser Bin Khaled Group, Al Waab City and Mercedes-Benz, to be an active contributor to this event for the second year in a row, as we provide diamond sponsorship and full support to make the event appear befitting the name and position of Qatar.

He added, “The concerted efforts of all of us, in the private and public sectors, is one of the most important means that contribute to achieving the best results. And our presence together today on this special occasion is the manifestation of the importance of these constructive partnerships so that the name of Qatar may shine brightly at international forums.

For his part, Mohammed Musa Al-Namlah, Executive Vice-President of Business Support, Services and Human Resources Ahli Bank, Exclusive Banking Sponsors, said: KIAHF is a great opportunity to continue our successes. We are proud to be sponsoring this event which revives our Qatari heritage and preserves our tradition and customs.

Representatives of the other distinguished sponsoring companies also expressed their pleasure on their association with KIAHF 2022. “The exclusive Festival upholds Qatar’s true and rich equine heritage and it is a matter of pride and honour to be associated with the event,” they said.